On the instruction of President Ilham Aliyev, a mosque resembling the Shusha mosque was built in the village of Jojuq Marjanli. This once again declares to the world that Azerbaijan is a part of the Islamic world and is committed to its historical past. The similar construction of the Shusha Mosque in the Old Marjanli also means that the Shusha mosque will be restored soon.

The head of state was acquainted with the conditions created in the mosque and was informed that the minaret of the mosque, which was built on 50 acres, was 26 meters high. This religious shrine, similar to the historic Shusha Mosque, considered to be one of the rare pearls of Azerbaijani and Eastern architecture, has all conditions for believers. All this proves that President Ilham Aliyev provides exceptional services in the preservation of national and moral values ​​in the country. The Head of State demonstrates genuine dedication to the protection of religious shrines in the country and their transmission to future generations, given the role of Islam in the life of our people and its importance in the formation of our national identity. 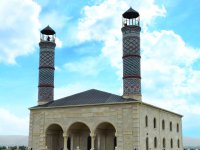