The mosque located in Icharishakhar was erected at the ancient temple of fire. The mosque is situated in the castle.  As the new building was built in 1899 after the pull downed it  can be judged on the basis of the new photographic images about the mosque. A little complicated formatted plan shows that Juma Mosque was built in several stages and expansion in a limited area surrounded by residential neighborhoods. There had been engraved four-line convex inscription on the limestone on the base of the minaret. The inscription is written in Kufic script. The end of some of the letters rises to the top and is complemented by Palmatta. The other letters have been added the floral ornaments. The inscription belonging to the XII century partially was damaged. In an article  on the construction of the building of the mosque is engraved on the wall reads: “Rajab Sharaf-Eddin Mahmoud Amir ordered to renovate this building in the month of Rajab in 709 (1309-1310) ". An existing mosque in the Old City since ancient times in 1024 (1615) was renovated in. Stored in the nineteenth century Juma Mosque, as a rule, differing from the rectangular shaped local mosques has an original form and a complex plan. Specific features of the Southern Azerbaijani religious monuments show itself here. In particular, the constructive resolution of the mosque's facade is of great interest. So that, the center of the area is covered by similar dome tent and the  facade is covered with the mined flat stones. The minaret is erected near the mosque have survived to the present day. The minaret is of great interest as a monument not only in the fourteenth century, but also unlike the broken minaret tower, it plays a valuable material role to detect the changes  in the Shirvan architecture from the XI century till to the XIV century. This minaret is more elegant and sophisticated than the broken minaret tower. The signs inherent to the defensive tower Broken castle almost were disappeared in this minaret. Along the same there are certain similarities between them. There was engraved inscription on the stone in the  lawer  part of the balcony of minaret. The part link from the minaret to the balcony is perfomed by the triple stalactite. The edges of the cheers are decorated with geometric figures. The label of the text of Elkhani Sultan Muhammad Olcaytu was engraved on the inscription on the foundation stone are revealed as a result of the archaeological excavations. The end of the nineteenth century and early twentieth century, one of the richest men in Baku Haji Shikhali Dadashov erected a new mosque for the charity at the ancient monument. The Juma Mosque one of the ancient historical architectural monument of Icarishakhar was renovated and restored in 2008 and given to believers. The mosque has been fully restored thanks to the hard work of the experienced construction professionals, architects and artists and there were installed  modern heating and lighting systems at the Mosque. Painters worked beatiful ornaments by the hand, wrote surahs from the Holy Koran. 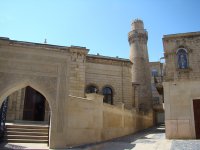 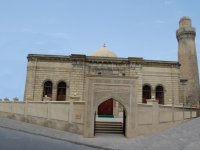 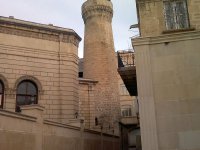 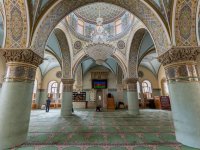