The Juma Mosque in Sumgayit was founded in 1991 and its construction financed by the city’s residents. The mosque has undergone frequent repairs and renovation. In July 2011 President Ilham Aliyev visited the mosque, after which he decreed that it should be renovated. A 34-metre high minaret was built, an area of 480 square metres was re-carpeted, the Mihrab was re-done, the interior of the dome decorated with inscriptions and a 624-square metre area re-floored. The mosque’s total area is 4.5 hectares and it can receive up to 500 people at a time. Following the renovation and reconstruction President Ilham Aliyev visited the Sumgayit Mosque on May 3, 2013, and thoroughly examined the refurbished place of worship. The President viewed photographs reflecting the pre-reconstruction condition of the Juma Mosque and expressed his satisfaction with its present state. 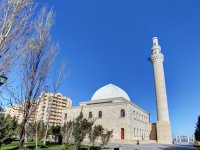 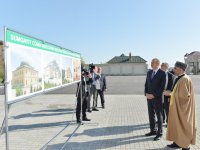 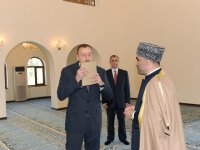 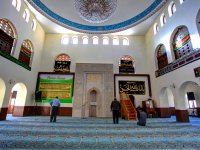 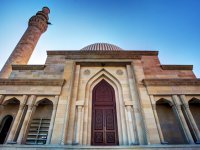