The Saray Juma Mosque was built by the local community in 1993, in the early years of Azerbaijan’s newly regained independence. The mosque’s interior covers 374 square metres, while the prayer hall can admit up to 400 people at a time. There is a 120-square metre women’s prayer room. The dome, 4.5 metres in diameter, and the rectangular ceiling rest on eight internal columns.

The palace has become a city-type settlement for the last 30 years. The part of the settlement called the "Old Palace" still remains today. This village is an ancient settlement on the Silk Road. Monuments, including four mosques, baths, tombs and other ancient buildings on the territory of the village, tell of its centuries-old history. The old Friday Mosque is still preserved in the village above the ancient caravan road. 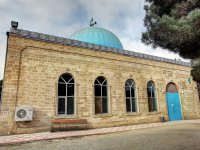 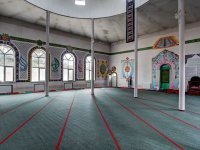