The Imam Hussein Mosque was built by a member of the local community, a philantrhopist named Haji Hussein, in 1897. The prayer hall is 132 square metres in area, while the courtyard is 170 square metres. The dome, four metres in diameter, has four windows and is supported by inside columns. The ceiling and floor are made of concrete. The entrance door, in the shape of a portal, slightly protrudes from the main building. In 1989 the Imam Hussein Mosque had a major renovation which radically changed its appearance from what it had looked like a century before.

The ancient village of Fatmayi has mosques such as Haji Heybat, Alvatdin, Poladlar and Khanimjan that date as far as the 15th, 16th and 18th centuries. Almost every neighbourhood of the village used to have a mosque of its own. Although the majority of these small neighbourhood mosques were shut down in Soviet times, the villagers always held them sacred: even though they would pass by them a hundred times a day, every single time they would slow down, whisper a prayer and secretely offer up blessings. All of these mosques were reopened after Azerbaijan regained independence, and resumed service after renovation. 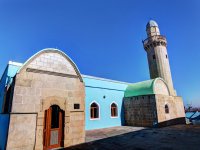 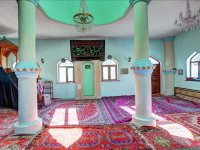