The Sahil Juma (Friday) Mosque, known as Fatmeyi-Zehra Mosque, was founded in 1999. The local community was greatly involved in the construction, contributing to the mosque’s gradual expansion. The As utility buildings were constructed in the single minaret mosque has a single minaret and a courtyard with auxiliary buildings, making it was turned into a a fully complex equipped complex. with all the necessary facilities.

The Sahil settlement, 28 km from Baku, was built in 1949. The reason for the settlement was the relocation of the cement plant from Baku to Garad, where it mainly accommodated young workers and young families. In the newly established Soviet industrial cities, they were trying to keep people away from religion. However, the collapse of socialism ideals in the late 1980s and early 1990s provided the basis for the religious revolt in place of the ideological vacuum not only in ancient cities and villages, but also in industrialized cities and towns. The Sahil settlement mosque was built at that time. 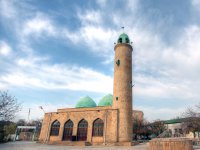 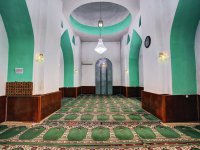