A synagogue on Isaac Hanukov Street in the Red Settlement of Guba District was built in 1888; the architect is Gilel ben Haim. The six dome (synagogue and 6 corners) is a symbol of the residents of the village of Kilgat in the vicinity of the village of Kaladuz for six days with the permission of Huseynali khan of Guba. The temple has 14 main windows.

The synagogue, which is a large prayer hall, is an ancient architectural monument built in the Oriental style. The part that looks inside the worship wall inside is called Aron-Kadush. It is the highest altitude in Europe, and has a unique view over Jerusalem. The height is 7 meters. The Bible is stored in a cabin on that wall.

The windows are made of oak trees in the form of a hexagon star. The synagogue restoration began in 1995 and was completed in October 2000. In the basement of the temple, which is currently used by believers, there is also a worship hall and a kitchen for 60 people. 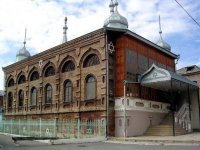