Michael Archangel is one of the oldest Orthodox Church temples in Baku. The church was built in the 40s of XIX century and it was a military places of worship. According to "Caucasus" newspaper report dated 1855, No. 39, the temple was built by high-ranking officials of Department of Caspian Sea in honor of the Russian volunteer fleet  and the regiment chief. For this reason, his prayer room would resemble a ship deck for earlier time and it was subject to the Caspian fleet. During this period, the temple was called the "Fleet of the Church" (russian "Flotskaya"). The church was built in Pskov style. Building of the temple was given to Baku battalion, then Salyan regiment in 1873. The church was given to administration of the Eparchy department in 1875.

Restoration of the church building launched in 1891 by consent of military administration’s protosviter and overhaul works were completed in november 1892. Restoration was carried out on account of the Holy Synod and it cost 22 min. rubles. new tsar doors and gurnbangahs(place of sacrifices) were installed and some parts of the temple were changed. All art works were fulfilled by Ems.

Consecration ceremony was held in honor of Holy Archistrig by the Archpriest of Nicholas Church and Grand Priest Alexander Vasilyevich Yuniskiy together with the clergy assembly in earlier renovated temple, on 1 November 1892. There were some icons in the church, but Saint Metropolitan Alexei Moskovsky and pride Divine Mother icons far more attracted attention among icons. These icons were presented as gift to Salyan regiment from Panteleymey Afonsk monastery. There is just one prestol (a little table placed in churches for implementation of some religious ceremonies) in the name of Saint Michael in the church.

November 8, 1899, the Holy Archistrig Michael icon was donated to the church. The icon was patron of Salyan regiment. Archpriest Sergiy Qorodsov was the head priest of the Church  of Michael-Archangel from 1918 to 1923. Later he became Metropolitan of Novosibirsk and was regarded as a holy man among people in Siberian. The aforesaid temple was closed down and turned into a hostel by the Soviet authorities in 1936. After victory over fascism, church building was returned to the Russian Orthodox Church  in 1946.

On May 25 in 2001, Patriarch of Moscow and All Russia Patriarch Alexy II visited the Church of Archangel Michael and had a ceremony of prayer. Currently, a Holy Apostle Bartholomew parish(residence of members of the lower church organization)is being constructed under lower floor of the temple by the initiative of Baku and Azerbaijan Eparchy archbishop Alexander Ishein. 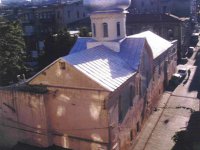 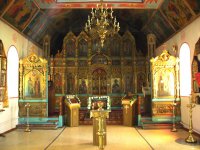 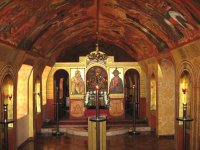 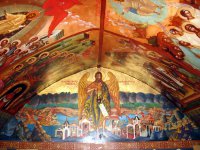