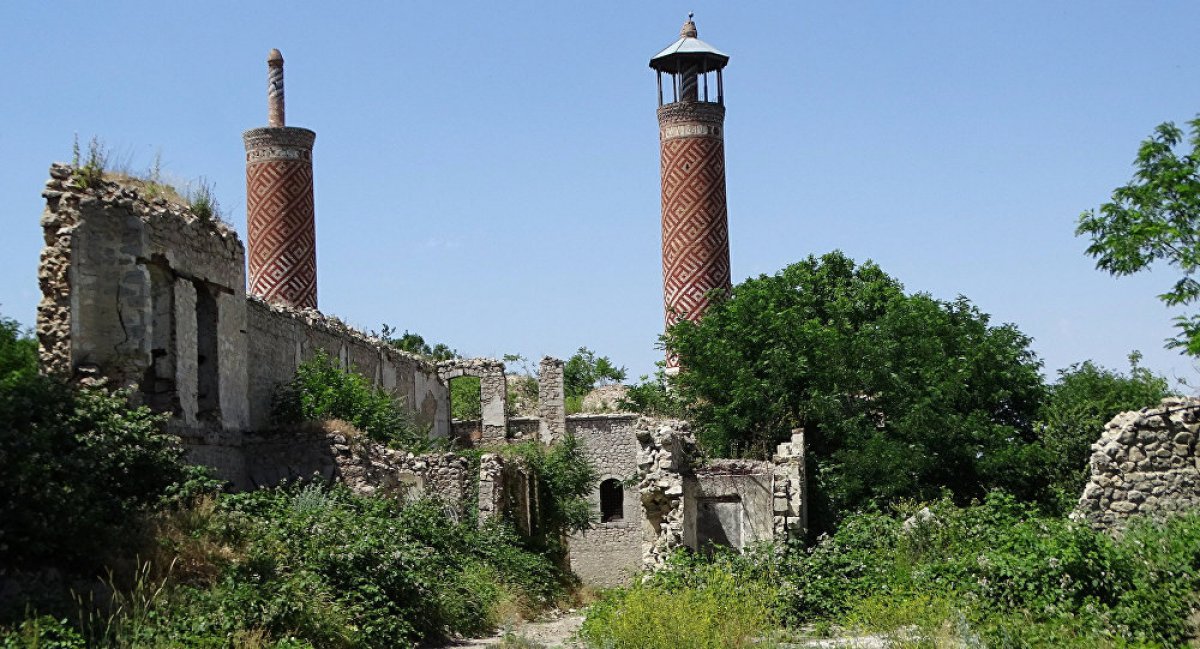 Heads of religious confessions in Azerbaijan have issued a joint statement on the destruction of religious sites by Armenian vandals in Karabakh.

“We, leaders of the Muslim, Orthodox, Albanian-Udi and Jewish confessions in Azerbaijan, express the wishes of the believers and appeal to the heads of state and government of countries, heads of international organizations, religious leaders and the world community. These days, after 30 years of struggle to restore its territorial integrity, the raising of the tricolor state flag of Azerbaijan over Karabakh lands again means a victory of historical justice and stability in our multi-ethnic and multi-religious country. The state of Azerbaijan and its President, His Excellency Mr. Ilham Aliyev have been pursuing a peaceful policy for many years, demonstrating consistency in the peaceful settlement of the Armenia-Azerbaijan Nagorno-Karabakh conflict on the basis of international law and resolutions of international organizations. Political talks have failed to produce a result and UN resolutions calling for an unconditional withdrawal of Armenian armed forces from Azerbaijani territory have not been implemented over these years. The people of Azerbaijan, forced to prevent further military provocations by the Armenian side, went to war to restore their territorial integrity, and this war resulted in the triumph of international law and justice. There are Christians and Jews along with Muslims amongst the martyrs for the territorial integrity of our country. However, the world community should know that Armenia has pursued a policy of aggression against Azerbaijan not only in the form of ethnic cleansing, genocide and occupation, but also against the diverse cultural and spiritual heritage of our country. State policy of Armenia based on mono-ethnicity was only aimed at leaving Armenian traces in the occupied territories. Armenia, which has created a society intolerant towards other nations and religions, has tried to completely erase the ancient Albanian, Orthodox, Muslim religious and cultural heritage that historically existed in the occupied territories of multi-ethnic and multi-religious Azerbaijan. It has either completely destroyed our cultural and spiritual heritage or falsified their history and origins by Armenianizing and Gregorianizing it. Unlike Armenia, thousands of citizens of Armenian descent live in peace in Azerbaijan, the capital Baku and various regions, and the Armenian church and its library in the center of Baku have been renovated and protected by the state. In the occupied territories of Azerbaijan, mosques, temples and cemeteries, historical monuments, museums, libraries have been destroyed and looted, Caucasian Albanian Christian temples and Russian Orthodox churches have been Gregorianized, mosques have been turned into barns and subjected to unprecedented insults such as keeping animals forbidden in Islam in them. Of the 67 mosques in Karabakh, 63 have been razed to the ground and the remaining three have been severely damaged. Armenia has completely demolished the historical Azerbaijani religious sites in its territory – Yerevan’s “Shah Abbas”, “Sardar”, “Haji Novruz Ali” and other mosques, and changed the architectural style of the Blue Mosque. Not content with destroying only Muslim mosques, Armenia has usurped the Gregorian Orthodox Church in Shusha, the Albanian-Udi temples in other districts, and completely destroyed the Khojavand Orthodox Church. The main goal of the aggressor state in committing such acts of vandalism with the dream of creating a “Great Armenia” was to destroy both our historical past and our spiritual memory in the lands where we have lived for millennia. The Armenian regime, which has been pursuing aggressive policies for years, has ignored the norms of international law and international humanitarian law, has committed environmental crimes in the occupied territories through fires, the use of phosphorus bombs, poisonous substances and mines. Today, real facts such as the atrocities they have committed when leaving the territories of Azerbaijan, the looting of material and spiritual resources, the theft of works of art, the burning of forests and civilian sites are extensively covered in the world media. Armenia's actions aimed at destroying and falsifying the religious and cultural heritage of the multi-ethnic and multi-religious Azerbaijani people represent a flagrant violation of international humanitarian law, including the Geneva Conventions, as well as an attack on all human culture and world heritage. Adhering to multicultural traditions, the Government of Azerbaijan considers the protection of cultural and spiritual values a priority and makes an invaluable contribution to the restoration of historical sites, mosques and churches not only within the country, but also in various parts of the world, including the Vatican, France, Bulgaria and Serbia. Known as one of the world's centers of multiculturalism, Azerbaijan has hosted a number of prestigious international events promoting inter-civilizational and inter-religious dialogue, including the Second Baku Summit of World Religious Leaders in November 2019. Visiting Azerbaijan in October 2016, Pope Francis praised the cooperation and dialogue between different cultures and religions in our country.

At present, Armenia is conducting false propaganda against Azerbaijan on religious issues, claiming that Azerbaijan has taken steps to destroy religious and cultural sites in our liberated territories, trying to portray its own provocations as those of our country. The fact that despite so many facts the aggressor state of Armenia demonstrates constant hypocrisy, circulates fake news and false information depicting itself as a suffering people causes legitimate anger of the Azerbaijani people, representatives of all religious denominations living in our tolerant and multicultural country. The President of Azerbaijan has repeatedly stated in his appeals and interviews that all religious and cultural sites and places of worship in the liberated lands, as indeed in other parts of Azerbaijan, will be restored, everyone's faith will be respected and peaceful coexistence will be ensured. As leaders of the Orthodox, Catholic, Mountain Jews, Albanian-Udi Christian, Ashkenazi-European Jews and other religious communities who have lived prosperously in Azerbaijan throughout our history and freely performed our religious rites, we support and bless this peaceful policy of Azerbaijan. We, the leaders of religious confessions in Azerbaijan, appeal to the heads of state and government of foreign countries, heads of international organizations, religious leaders and the world community to support the establishment of peace, tranquility and coexistence in our country and the region where we live!

Chairman of the Caucasian Muslims Office

Archbishop of Baku and Azerbaijan

Head of the Mountain Jews Community in Azerbaijan

Head of the Albanian-Udi community