A great supporter of national and moral values 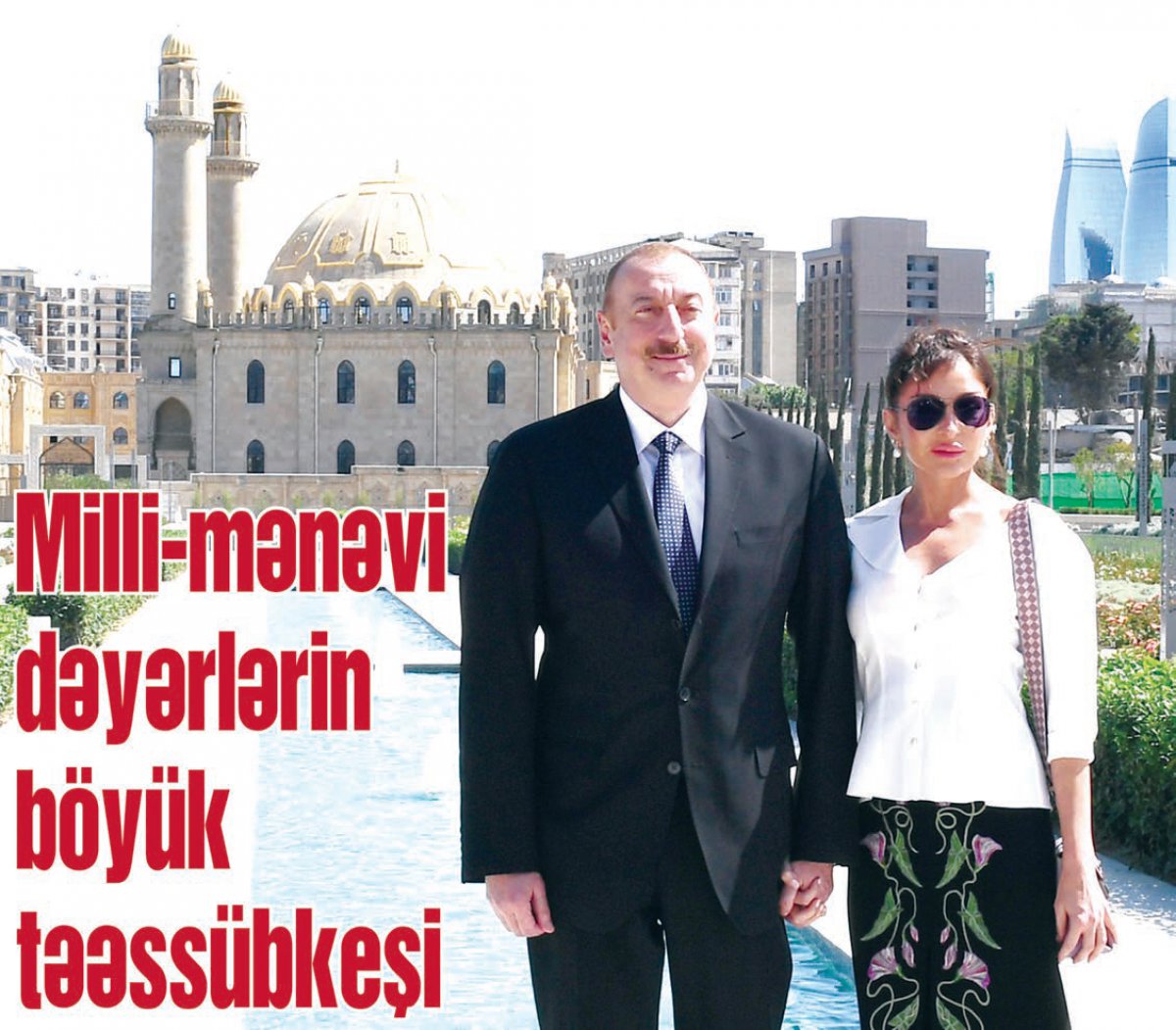 Azerbaijan people are known with their rich national-moral values and traditions all across the world. Although our people have experienced various socio-political formations, they have preserved their moral values and approached them as the most precious wealth.

National-moral values of our people have got an ancient history. Qualities such as respect for the family, love to motherland, hospitality, helping others, respect for different religious beliefs are promoted in Azerbaijan folklore (Azerbaijan folk poetry). İdeas regarding with national-moral values are put forward in proverbs, bayatis, epos, narratives and other genres. The Book of Dada Gorgud (Kitabi-Dada Qorqud), the brilliant folklore monument of Azerbaijan reflects the rich historical, cultural, national-moral values, beliefs, lifestyle of our people and its characters as well. Preserving national traditions, the matters of bringing up young people who love their homeland and are brave in the fight against enemy were widely highlighted in the epos. Good family relations are glorified, the strength and power of the people are shown to be invincible as a result of the strength of the family and the steady increase of the generation in the book. The words by elderly person are exalted in the book, Oguz warriors (heros) seek his advice before trip or battle. The gopuz (ancient musical instrument in the epic) is considered as means of creating a heroic spirit in the epic "Kitabi Dada Gorgud" and respect for it is a national-ethnic tradition.

National-moral values found their artistic and aesthetic, philosophical expression in the ancient period of Azerbaijan literature, art and philosophy, loyalty to the homeland and traditions was expressed with figurative and poetic way.

Humanistic and universal values were a key point in the literary creativity of prominent figures of Azerbaijani classical literature and respect for national-moral values were associated with the tolerant lifestyle of our people. Ancient and medieval literary, philosophical and artistic works are rich with multicultural views, ideas that reject racial, national and religious discrimination, and call people to unity and humanism.

The importance of national-moral values ​​of our people was widely illustrated in the socio-political opinions of the 19th century Azerbaijani enlighteners. Although the concept of Azerbaijanism that used as a national idea was mainly utilized in the sense of patriotism, its scientific-theoretical and practical bases had not yet been formed.

The enlighteners considered Azerbaijanism as a value that envisages the development of the native language, national-historical heritage and moral values and inspires a sense of patriotism in people. Our progressive intellectuals were making speeches addressing to new political demands and was putting forward the idea of ​​state independence under the influence of socio-political conditions at that time. In 1918, the ideology of Azerbaijanism found its historical embodiment and confirmation with the establishment of the Azerbaijan Democratic Republic, the first democratic parliamentary and secular republic in the East. However, the prohibitions by communist ideology and the policy pursued by the former USSR in  the area of national relations began to suppress the idea of ​​Azerbaijanism following the collapse of the Democratic Republic of Azerbaijan.

Protection and development of national and moral values ​​are one of the major directions of state policy due to its important role in the development of Azerbaijan people, its contribution to the enrichment of world culture, and its communicative function in ensuring civil solidarity. Significant steps were taken to enrich our national-moral values and a new stage was opened for the improvement in artistic heritage, culture, art and national language of the people under the leadership of National Leader Heydar Aliyev in Azerbaijan during the Soviet period. The sense of national self-consciousness was strengthened, views on the national identity and thought were formed in the Republic of Azerbaijan. The spiritual and ideological connection between tradition and modernity had a significant impact on the development of national self-consciousness. National-moral values ​​were enriched, humanities and social sciences was in progress. The works embodying the desire of our people for freedom were protected from political and ideological attacks.

Heydar Aliyev was principal in his actions in the direction of the taking ideology of Azerbaijanism to an important place in public opinion, achievements was made in comprehensive and in-depth study of the history, language, literature and culture of our people and the focus was on educating the younger generation in the spirit of national-moral values.

Important steps were taken toward the development of the mother tongue, which is an integral part of national-moral values despite the limitations imposed by the ideology of communism. Heydar Aliyev took into account the importance of our people's love for their native language, first of all, to promote national-moral values. For this purpose, a four-volume textbook titled "Modern Azerbaijani language" prepared for the university students in 1974 and the book awarded with the State Prize and when the he Constitution of the Azerbaijan SSR adopted in 1978, the article was included to the constitution Azerbaijani language being a state language. Heydar Aliyev created a favorable socio-political, scientific and spiritual environment for national-moral values ​​to take an important place in public life in that period. The works created by prominent Azerbaijani writers and cultural figures, taking advantage of the created conditions played a special role in educating the younger generation in the spirit of the Azerbaijani ideology.

Economic relations based on public property and one-party political system in the Soviet Union as well as in Azerbaijan failed after the collapse of the Soviet Union. Stereotypes formed in the public consciousness regarding with national-moral values challenged with characters arising from the new socio-political system. Contradictory and complex processes, violation of the principle of succession in the development of public consciousness in Azerbaijan in the early 1990s had a negative impact on national-moral values. Although the ideology of communism was rejected in the Republic of Azerbaijan, the national idea that mobilizing the people around it and possessing the ability to preserve and develop national-moral values ​​was not put forward. Attempts of rejection from scientific, intellectual, moral, and social values by saying "they belong to the past" created a serious ideological gap in the country.

After the return of prominent statesman Heydar Aliyev to political power in 1993, a turning point in the development of national-moral values ​​, foundation for great achievements were laid down in the development of science, education, culture and art. The National Leader pursued a purposeful policy aimed at ensuring that progressive religious values which are one of the components of national-moral values. Highly appreciating the importance of religious values in the country, National leader Heydar Aliyev said: "There are a number of religions in the world and each of them has its own specific place. We, Azerbaijanis being proud of our religion-Islam, which have never displayed negative and unfriendly attitude, towards other religions, have never been at enmity and never obliged other nations to practice the religion of Islam”. The establishment of the State Committee on the Religious Associations of the Republic of Azerbaijan by National leader Heydar Aliyev’s decree dated June 21, 2001 was aimed at regulating the state-religion relations, conducting enlightenment work in the sphere of religious beliefs, so forth. was an important event. The work done in order to preserve traditions, especially restoration of examples of Islamic culture - mosques, historical architectural monuments, shrines destroyed during the Soviet period is a clear proof of national leader’s commitment to national-moral values.

State policy conducted by the Azerbaijan government takes into account the importance of culture and art as the best means of communication between people and nations, the government pays special attention to their development and promotion. During meetings with our natives in foreign countries, National leader advised them to be faithful to the Azerbaijani ideology, national-moral values, to keep the traditions of our people alive, regardless of where they live in and he said: "We all have one homeland - Azerbaijan. Azerbaijani can live anywhere, but he/she should not forget that he/she is Azerbaijani, should not forget native language and national traditions. His/her heart should always hit with his/her native Azerbaijan. "

National leader Heydar Aliyev's political course that contains progressive development of national-moral values is consistently and purposefully implemented by the President of Azerbaijan Republic Ilham Aliyev.  President Ilham Aliyev’s services in this area are an example of high level of care and attention to Azerbaijani culture, literature, folklore and art. The work done in this direction comes from the state policy aimed at promoting the idea of Azerbaijanism and national-moral values worldwide.

Considering the modernization of the country based on national-moral values, President Ilham Aliyev said: “Modernity, innovation and commitment to national values, national roots in the meantime. This idea which reflects the current Azerbaijan is very clear and known to everyone. Azerbaijan people have always been a people connected to their national roots, and our future success depends on these factors. We are building modern, strong, secular Azerbaijan based on our historical, rich cultural legacy”

By the decree of President Ilham Aliyev, dated October 10, 2017, the Moral Values Promotion Fund was established under the State Committee on Religious Associations of the Republic of Azerbaijan in order to establish wide ranged conditions for the activities of religious confessions, protect and develop moral values and attract government support to this area.

The tolerant environment, inter-religious dialogue in the country have created favourable conditions for the development of national-moral values and relations between state and religion.  Republic of Azerbaijan contributes to the development and enrichment of Islamic culture as an integral part of the Muslim world.  Religion of Islam, both as a religious belief and a national-moral value of the people is an integral part of people's lives. Islam has a key role in the development of national-values, the establishment of a strong and healthy foundation of the family.

As one of the countries promoting multiculturalism, Azerbaijan has gained a great reputation of being a bridge between civilizations and a unique place for intercultural dialogue around the world. President Ilham Aliyev pursues a consistent policy to promote and advance this value.

Baku International Multiculturalism Centre was founded with the presidential decree dated May 15, 2014 taking into consideration the promotion of Azerbaijani multiculturalism all across the world, analysis of philosophical, social and political aspects of multicultural models of different countries in the reality of the country.

Azerbaijan has hosted prestigious international events, summits and international conferences in various spheres. The Baku International Humanitarian Forum, the World Forum for Intercultural Dialogue, the Global Forum of the UN Alliance of Civilizations, the Summit of World Religious Leaders also have special place in this series. Declaring 2017 as the "Year of Islamic Solidarity" in Azerbaijan is the best indicator of country's commitment to the progressive values ​​of Islam.

The abovementioned facts prove that the national-moral values of the people of Azerbaijan are developing on the basis of the principle of historical heritage and they have a special place in the enrichment of world culture. Protection and promotion of national and moral values are one of the main directions of Azerbaijan state policy. Azerbaijan’s contributions to Intercultural and interreligious dialogue is of great importance in the development of these values.

Chairman of the State Committee on Religious Associations, 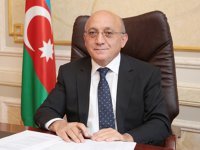