It is located 7 km from the city of Ganja, on the territory of Ganja State Historical and Cultural Reserve. A religious complex consisting of small mosques, solitary houses, caravanserai houses, alagapi and auxiliary buildings was created around the brick tomb, stone and brick fences were built around it. Inside the complex there is a tomb known as the "Blue Dome", "Blue Mosque" or "Blue Imam". One of the most valuable architectural monuments in our country, the tomb of the fifth imam, Mohammed Bagir Ibrahim, was buried.

The date of the Imamzadeh tomb's construction has not been specified. According to the architectural structure, it is assumed that the tomb was built in the late 14th - early 15th centuries, and the complex was built in the 17th century. The height of the tomb is 12 m, the height of the dome is 2.7 m, and the diameter is 4.4 m. The dome of the tomb was named "Blue Dome" because of its blue glaze. As in the Barda and Nakhchivan imamzade mosques, there is an architectural style similarity between the Imamzadeh Tomb and the Barda Tomb, as well as the Ahsadanbaba Tomb. The Imamzade has a brick-covered, brick-covered dome made of brick. A mosque, a tomb and other tombs were built around it.

Imamzadeh shrine, which has been subjected to destruction at various times, has been operating as a pirate of Imamzade since 1946. In the 1970s, Imamzadeh's administration was subordinated to the Spiritual Administration of the Transcaucasian Muslims. At various times, even during the Soviet period, especially during the years when the National Leader Heydar Aliyev headed Azerbaijan, Imamzade was renovated as a historical monument. At the same time, it was the only one in the Soviet Union that had been officially registered. The religious monument not only proves Ganja's antiquity, but also shows the city's place and authority in the Islamic world. President Ilham Aliyev paid particular attention to the complete reconstruction of the religious and historical monuments of the country and its delivery to future generations. This temple, which is a place of faith and belief, has received such a beautiful view thanks to the orders and instructions of the head of our state. Thus, President of the Republic of Azerbaijan Ilham Aliyev signed a decree on 1 March 2010, December 30, 2011, January 24, 2012, 5 June 2013, 16 May 2014, 21 October 2014, 49 million manats were allocated for repair and reconstruction of the complex by the orders of 5 November 2014, 9 April 2015, 9 September 2015 and 9 February 2016. 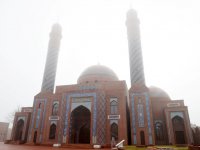 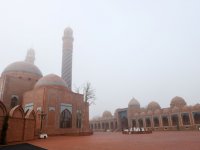 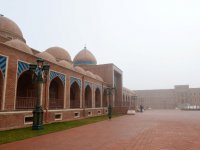 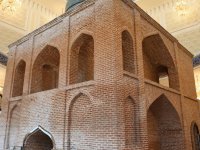 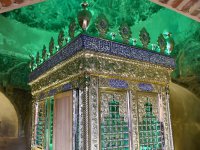