The Pir Hasan Shrine located in the village of Mardakan near Baku city has two mausoleums. One of the mausoleums, with an ancient cupola, is the burial place of Pir Hasan. According to historic sources, Pir Hasan, who allegedly traced his lineage back to the Imams, lived in the 17th century.

A two-line plaque, set above the door to the mausoleum, reads in Arabic: “This tomb, praise be upon it, is of a man of wisdom, Pir Hasan. Built by Dervish al-Husseini in the age of the formidable king Shah Abbas (may Allah prolong his reign). In the year of one thousand and twenty one.“ (16121613). A memorial to famous Azerbaijani millionaire Haji Zeynalabdin Tagiyev stands in the front area of the shrine and to the right is his mausoleum.  In the middle of the  mausoleum is the grave of acclaimed clergyman Akhund Haji Mirza Abdulturab Akhund-zadeh, surrounded by the graves of Haji Zeynalabdin Tagiyev, his daughter Sara-khanum Tagiyeva and Zeynal-bey Salimkhanov who fell victim to Soviet repression.

The Pir Hasan shrine was renovated in 2007 as part of the Heydar Aliyev Foundation’s ambitious plans to restore historic religious monuments, including the building and renovation of mosques and shrines. On December 30, 2007 Azerbaijani President Ilham Aliyev and his wife Mehriban Aliyeva attended the opening ceremony of the Pir Hasan shrine, inspected the refurbished complex and wrote in the commemoration book. 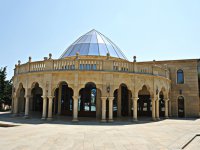 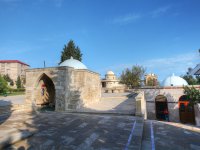 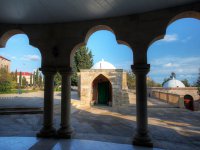