This place is an old mosque and shrine on rocks on the shore of the Caspian Sea. Legend has it that the shrine was founded by believers in the late 12th century after they saw a footprint left in the rock by the fourth Rashidun Caliph, Ali ibn Abi Talibi.

In 1861, the shrine was officially registered under the name Ali Ayaghi (Ali’s Foot) by the Russian Czar’s governor, based on the testimony of 10 elders of the village. Several attempts were made to demolish the mosque during Soviet times, each one meeting tough resistance from the villagers who eventually won out. This is now a holy site consisting of a shrine that conserves the footprint of Hazrat Ali (P.B.U.H.) on a rock, and an impressive mosque.

A footprint or other trace is a philosophical concept. A trace is a sign of someone or something that was once here but is no longer. That is, it is both present and absent. Legend has it that a Muslim believer dreamt that he was standing on rocks by the sea and speaking to Hazrat Ali (P.B.U.H.). The next day he shared his dream with his closest friends. And the common belief is that if a dream is remembered and told to others, then it must have its fulfilment of a kind. And so the villagers assembled and went to the seaside rocks where they discovered the imprint of a foot in the rock. Well, it is understood that no footprint can ever be impressed in a rock. The people, quite naturally, believed that it was indeed a footprint left by their dearly beloved Hazrat Ali (P.B.U.H.), and that’s how the mosque and shrine came into being. 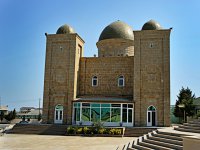 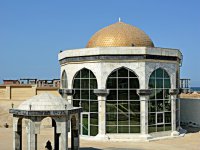