Researcher Bernhard Dorn who visited the place in the 19th century, copied 10 decrees about the shrine that had been issued by Safavid Shahs Tahmasib I, Abbas I and Hussein at different times. The famous French writer Alexander Dumas, who was in Baku in 1858, was also impressed by the shrine, and made a note in his travel diaries on the subject. Legend has it that esteemed Azerbaijani poet Khurshidbanu Natavan, who longed for a child, had her wish come true after visiting Hakima-khanum’s grave. She stayed true to the vow she had made beforehand and spared no expense in having a road laid to the shrine.

The Bibiheybat Shrine was targeted in the early years of Soviet rule, and was completely demolished in 1934. National Leader Heydar Aliyev founded a new mosque complex on the site on July 23, 1997, on the birthday of the Prophet Muhammad (P.B.U.H.). A year later, he personally led the opening ceremony of the mosque, on July 12, 1998, again on the birthday of the Prophet (P.B.U.H.).

Under President Ilham Aliyev’s caring charge, reconstruction and expansion of the Bibiheybat Mosque and Shrine complex resumed. Precisely 10 years to the date of the main building’s opening, on July 12, 2008, the mosque complex was once again presented to the public upon the completion of all reconstruction and refurbishment works.

As is the case with other impressive Muslim shrines, this mosque, too, has received museum visitors for the first time. The mosque can receive up to 3,000 people at a time. The first and second floors, the central hall, the foyer ceiling, and the basement walls are all adorned with delicate architectural ornaments and features. The mosque’s cupola is also a splendid example of craftsmanship. It portrays the An-Nisa, Al-Kovsar and Al-Ikhlas Surahs of the Holy Koran using smalta and other colorful stained glass. 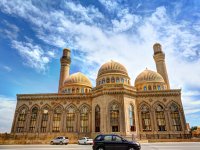 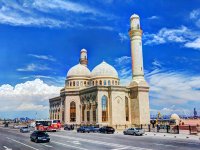 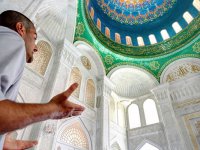 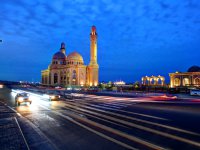