The Gilaki synagogue, located in the Red settlement in the Guba region, was built by immigrants from the southern province of Gilan. The architect of the temple is Gilel ben Khaim. His name is engraved on the synagogue's brick facade. The inscription on the inscription indicates that the temple was erected in 1896. But there is another plaque on the door. Here is another date, that is, 1857. It may be that the plaque was brought from a former temple of Jewish immigrants with a garland, and it was hinged on the synagogue entrance door. A small, hexagonal dome rising on a quadrangular roof adds special beauty to the Temple of Gilaki. The synagogue has 12 windows, according to the number of Israeli branches. It is known from historical sources that there was a spring near the synagogue. The mosque, probably built in the first half of the 19th century in Guba, was a prototype for the Gilan temple, as the hexagonal dome was once glass and illuminated the prayer room. Anological roof is also available in the Guba mosque. In the past, there were no separate rooms for women in the Gilead synagogue, as in most other Jewish temples. The women were there only at the feast, and they were seated in the synagogue's courtyard. Now the women are allowed to go to the temple at the festival. 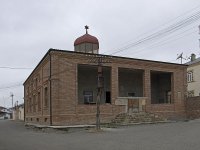