The Mountain Jews' synagogue building in Baku has been in existence since 1945. After the end of World War II, the mountain Jews were given an ancient building in the city center to meet their religious needs. The building was in a very bad condition, and those who worshiped here were suffering from unrest. This continued until Azerbaijan gained its independence. During the independence, the temple began to be renovated, the second floor of the synagogue was erected, and comfortable conditions were created for worshipers.

In 2010, a new synagogue was needed for the Mountain Jews in connection with the reconstruction and overhaul in Baku, which was initiated by President Ilham Aliyev. On April 5, 2011, the opening ceremony of a new Temple for the Mountain Jews was held at 72 Mard Topchubashov Street, Nasimi District. The opening ceremony of the synagogue, distinguished by its architectural features and size not only in other Jewish temples in the region but also in the region, was attended by officials, leaders of religious confessions, members of the Jewish community in Israel, as well as guests from Israel, Russia and other countries. 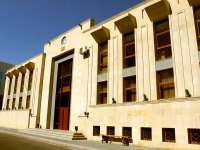