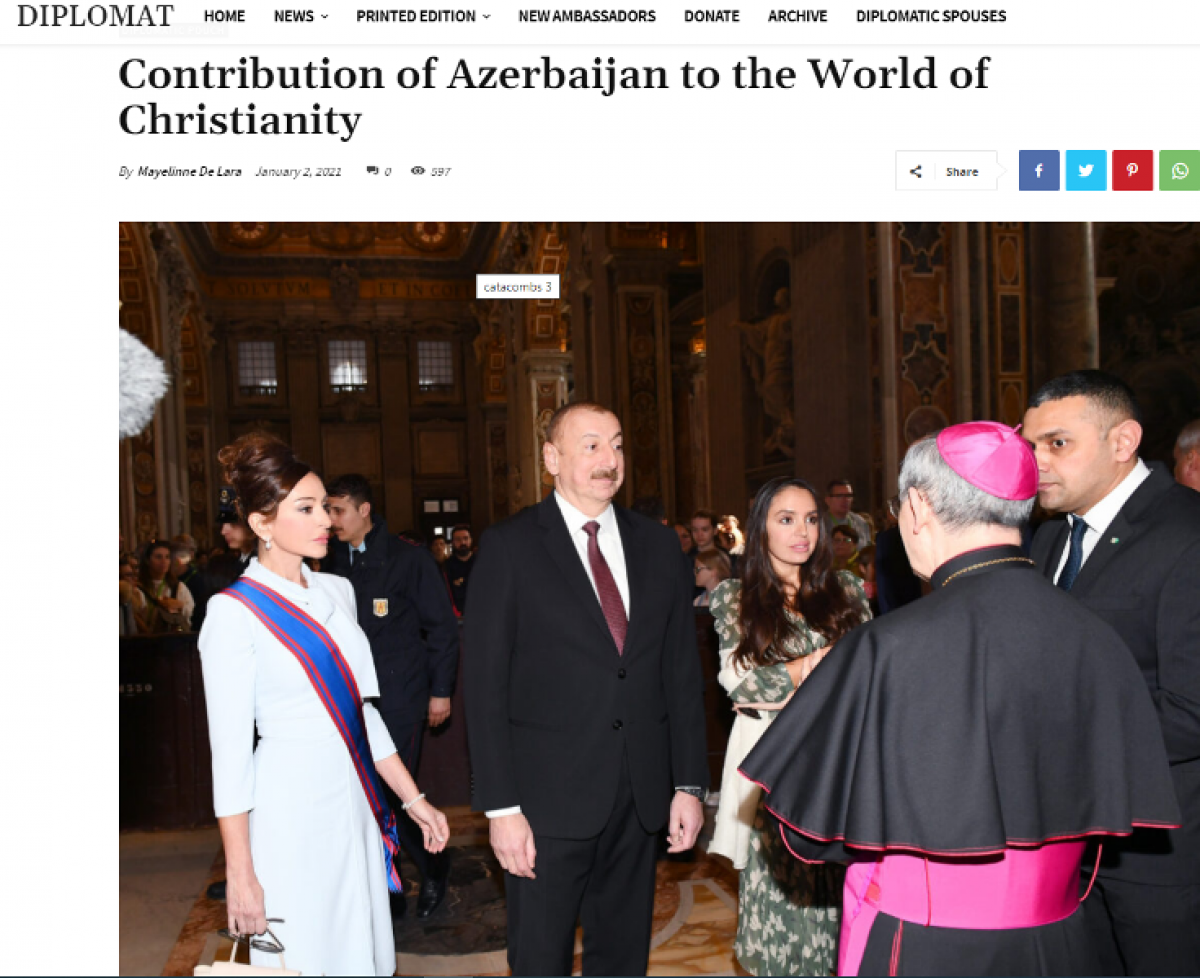 Dutch “Diplomat Magazine” published an article titled "Contribution of Azerbaijan to the World of Christianity." The article is about multiculturalism policy implemented by Azerbaijan, environment of tolerance and the traditions of coexistence in the country. At the same time the author touches State’s sensitive approach to the renovation and construction of Christian sites within and beyond its borders.

Contribution of Azerbaijan to the World of Christianity

The Republic of Azerbaijan, also called from ancient times as “Land of Fire”, is the biggest country of South Caucasus and is located on the historic “Silk Road” connecting Eastern World with Europe. Azerbaijan, with capital city of Baku, is neighboured to Georgia, Russia, Iran, Turkey and Armenia, as well as bordered through Caspian Sea with Kazakhstan and Turkmenistan. Because of these reasons, Azerbaijan and Azerbaijani people are known with their tolerance, multi-confessional and multi-cultural character.

Azerbaijan actively contributes to preservation of Christian religious sites both within the country, as well as worldwide. Heydar Aliyev Foundation of Azerbaijan, governed by First Vice-President of Azerbaijan, H.E. Mrs. Mehriban Aliyeva, is one of the main implementing agencies for execution of such noble projects in Italy, France, Russia and other countries in the world.

Just recently – in 2020, Azerbaijan restored the bas-relief “Meeting of Pope Leo I with Hun Emperor Atilla” in the Saint Peter Church in Vatican. This temple is one of the most famous examples of the Italian architecture of Renaissance era. The Saint Peter Basilica is also a famous place of pilgrimage and ceremonies. In fact, Pope usually holds several religious ceremonies over the course of a year, in the Basilica or on the square before it. During the last decade, several catacombs in Italy and Vatican were also restored by Azerbaijan. Among them, Saint Sebastian catacombs in Vatican deserve special attention. These catacombs, which host more than 8.000 tombs of significant importance to Christian World, were discovered in 1578 and some of the monuments here date back to the 3rd century. Restoration of these sacred shrines of Christianity gives opportunities to modern day people to witness and experience the history and rise of Christianity. Saint Marcellino and Pietro’s catacombs are also among the restored catacombs by Azerbaijan.  Out of some 60 catacombs located around the city of Rome, just these catacombs are considered among the most significant monuments for the Christian World. It is for this reason, funding of this project by Azerbaijan was highly appreciated by the Holy See.

It should also be noted that Azerbaijan also paid attention to restoration of Christian sites in France. In particular, we can emphasize restoration of 7 churches related to the 10-12th centuries in Saint-Hilaire, Fresnaye-au-Sauvage, Saint-Hilaire-la-Gerard, Tanville Courgeout Reveillon and Male settlements of Orne Department, France. Also, necessary financial assistance was allocated by Azerbaijan to Strasbourg Cathedral Church of 14th century, for restoration of five stained-glass windows of the church which depict lives of Virgin Mary and Jesus Christs.

Azerbaijani government spared no efforts to preserve both Catholic and also Orthodox religious sites. It is to this effect that a monument to Prince Vladimir was erected by Azerbaijan at a square before the Saint Vladimir Church in the Russian city of Astrakhan. Erection of this monument is devoted to the 1025th anniversary of Christianity in Russia, and the 455th anniversary of laying the foundation of Astrakhan.

For Azerbaijan, bridging Islamic and Christian world is also of significant importance. It is in this capacity that Azerbaijan, together with France, Kuwait, Oman and Morocco, funded creation of new halls in the Louvre Museum of Paris, dedicated to Islamic Art. The Islamic Art section in the museum represents examples of architecture, painting and other cultural creativity of Islamic Art. Here are displayed over 5 thousand whole art examples, including various items made of glass, ceramic and metal, as well as carpets, garments and miniatures, and over a thousand incomplete and damaged works of creativity.

These projects once more demonstrate contribution made by Azerbaijan to the monuments and shrines of different religions. By implementing this project, Azerbaijan showed its respect to the art and spiritual treasures of Christianity. Pope Francis, in his visit to Azerbaijan in 2016, praised Azerbaijan’s tolerance and multiculturalism. Moreover, President of Heydar Aliyev Foundation of Azerbaijan – H.E. Mrs. Mehriban Aliyeva was honoured in 2020 with the highest degree of the Pontifical Order of Knighthood – Knights Grand Cross of the Order of Pius IX – for her contribution to the development of mutual relations with institutions of the Holy See. 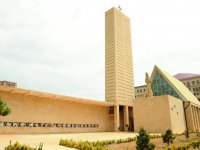 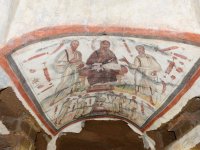