The article titled "Azerbaijan - a country where national and moral values ​​are protected and religious tolerance is highly ensured" authored by the chairman of the State Committe on Religious Associations Mubariz Gurbanli was published on the internationally influential Pakistani media portal https://www.parhlo.com/.

The article deals with the current exemplary model of religious tolerance in Azerbaijan, successful state-religious policy by the President Ilham Aliyev based on our national and moral values founded by national leader Heydar Aliyev, Armenia's aggressive policy against Azerbaijan and recent provocation of armenians in Tovuz in July of this year.

Moreover, preservation of the traditions of religious tolerance and multiculturalism in a decent way in Azerbaijan and successful policy implemented by the President in this direction, establishment of Foundation of Moral-National Values Promotion and Baku International Multiculturalism Center by the presidential decree as a practical evidence of it is emphasized in the article.

At the same time, the First Vice-President of the Republic of Azerbaijan, President of the Heydar Aliyev Foundation, the goodwill ambassador of UNESCO and ISESCO Mehriban Aliyeva’s special attention to projects realized in science, education and culture in Azerbaijan, detailed information regarding with restoration of a number of mosques, churches and other religious monuments and putting into operation with the support of the Heydar Aliyev Foundation which plays a special role in promoting national and moral values not only in Azerbaijan but also across the world is highlighted in the article.

In addition, territorial claims of armenians against Azerbaijan throughout history, occupation of Azerbaijan’s internationally recognised territories, ethnic cleansing policy, gross violations of the principles of international law, as well as the destruction of our religious and cultural monuments by the invaders is strongly condemned. The author also pays attention to main priorities of the state policy such as the special contribution to interreligious and intercultural dialogue of Azerbaijan and hosting various prestigious international events in this area, as well as the protection and promotion of national and spiritual values, religious tolerance in the article.

You can get more detailed information on article at the following link: 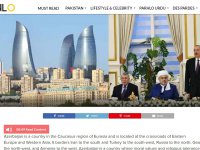